This is the third post in the “Divorce & Hidden Money” series:

The above-described matters raised the same question, how could these husbands secretly transfer funds across international borders into offshore bank accounts?  Like narco-traffickers, tax evaders, terrorist financiers and others, divorcing spouses may use the following methods to secretly transfer assets:

Bulk Cash Smuggling– Determined criminals routinely smuggle cash through porous borders.  Illicit cash couriers for instance, travel through Mexico-U.S. border crossings on behalf of  Mexican drug cartels.  German tax cheats are also known to smuggle undeclared cash into Liechtenstein by stashing the cash in luggage and then driving with it across the German-Liechtenstein border.

Portable Valuable Commodities Like Diamonds & Jewelry– After his arrest, Bernard Madoff seemingly tried to transfer watches, cufflinks and other jewelry worth more than $1 million.  Madoff attempted to mail these items to friends and relatives.  Bradley Birkenfeld the whistleblower, is believed to have similarly smuggled diamonds in a tube of toothpaste while on a jet flying across U.S.-Swiss borders.

Lawyers, Accountants, Financial Advisors & Other Gatekeepers– While acting as intermediaries for a divorcing spouse, gatekeepers can easily wire transfer the divorcing spouse’s money across international borders.  A divorcing spouse might also secretly maintain funds by depositing them into a gatekeeper’s offshore bank account. 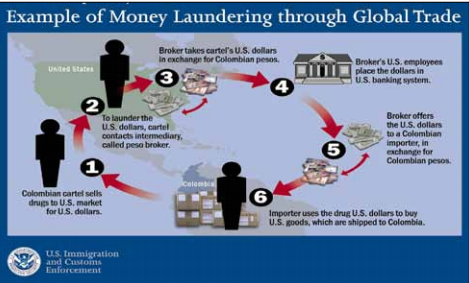