This is the eighth post in the “Divorce & Hidden Money” series.  Like “Four Asset Concealment Tools” and “Four Ways Assets Can Be Secretly Transferred”, the post reveals methods a spouse may use to hide marital assets and keep more than his/her fair share of the marital estate.

Credit/Debit Cards- Using a credit or debit card which draws from a secret foreign bank account is one way divorcing spouses can secrete and/or launder assets.  This method is so common that the IRS established its Offshore Credit Card Program to detect tax cheats maintaining undeclared foreign accounts.

A ‘Zebra’ Strategy (a.k.a Commingling)- A divorcing spouse may conceal marital assets by commingling them with business or other assets.  This ‘zebra’ strategy of mixing assets, is mentioned by the article Cayman Bank Records Seized.   The article discusses Germany’s recent seizure of records and says that some Coutts Trust Company customers “followed a ‘zebra’ strategy of mixing legally declared and taxed accounts containing smaller amounts with undeclared accounts containing larger sums.”

Asset Protection Services- One promotor of these services is Capital Asset, Inc.  Its website claims that forming companies in Nevada, or Wyoming, or Delaware is preferable because: “Do you know that partnerships, corporations, LLCs in most states make you completely visible? If a judge can see your assets, he can seize them.”  Divorcing spouses may hire a promotor of asset protection services to establish such companies which can then be used to open bank accounts or maintain assets with anonymity.

Related-Party Loans- Sham loans between related parties which appear to be at arm’s length, are another way divorcing spouses can hide assets.  As set forth at Money Laundering, Marital Assets & Divorce, the loan depicted below was used by a divorcing husband to launder both marital assets and undeclared revenue.  Prior to the equitable distribution hearing in his divorce proceeding, the husband alleged he had a liability of $29 million owed to a prime bank in Germany because of an arm’s length business loan.

According to the husband, he was indebted to the German Bank and had defaulted/failed to repay the loan.  The supposed arm’s length loan was however, back-to-back , (i.e. a fully collateralized loan in which the borrower and the lender are one and the same).  As a consequence of strict compartmentalization, the divorcing wife would not ordinarily be able to recognize that the divorcing husband was both the borrower and lender of the loan: 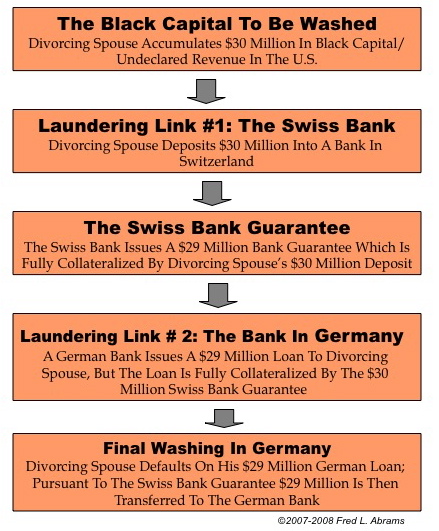